We’ve all seen the headlines: Rats as big as cats! Giant rats spotted in New York!

Were they? Were they really though?

I’ve been working in the pest industry for many years now and never have I come across such whoppers! But they’re in the headlines all the time, so they must exist; right?

Oh, who am I to get in the way of a good story?

The ‘Giant 4-foot-long monster rat’ found in children’s playground in London’ headline shocker is a much better headline than ‘Man catches regular sized rat in playground’.

I get it; all I’m saying is, don’t be easily fooled or scared! It’s pretty much a certainty that you won’t ever find yourself face to face with a rat the same size as a small child anytime soon; unless you’re from The Gambia that is, which is home to the Gambian Giant Pouched rat.

Often, the image which you see doing the social media rounds and made you shudder is very much a case of smoke and mirrors; it is in fact down to the angle in which the photo has been taken.

In response to the giant 4ft monster rat above, Hackney Council responded with a tweet containing this image. Perspective eh? 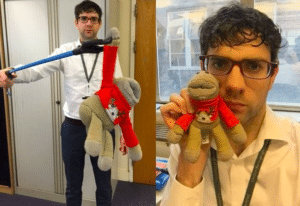 Yep, it’s unlikely that the giant rat ever existed.

It’s funny how things seem to come up isn’t it? I’m writing this now after receiving a Google alert about Giant rat snared is biggest-ever measuring a whopping 20 inches to which my response was a little smirk and knowing shake of the head.

Then, a few hours later when searching for an article I came across a comment I had made when president of the BPCA.

“Giant cannibal rat stories get front page news, even if they are fake. While it’s difficult to resist, I’d advise members ‘don’t join the bandwagon – stay clear of it’.

“BPCA has a role to play by offering guidance on how to answer this type of enquiry. I’d also say that the media always wants to go out and see a bad site, they aren’t interested in ‘safe’ or a site where you have successfully controlled an issue – that’s boring for them.

“No, the media generally seem to want ‘car crash TV’ or stories – we shouldn’t stoop to that level.”

I stand by my words.

Now, please can you spread news of Martin Harvey’s giant cup of coffee for me please!